A team of scientists wants to accelerate research into a genetic disorder by using CRISPR to copy unique mutations from affected children into pigs. 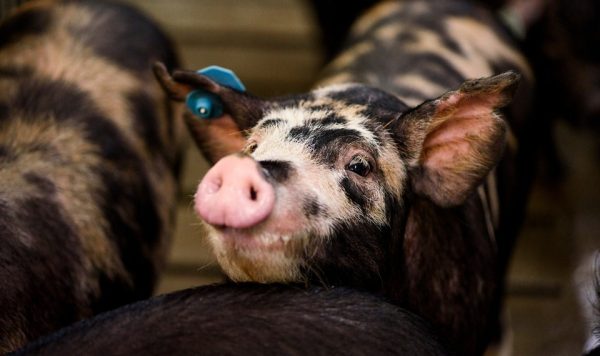 When Charles Konsitzke and Dhanu Shanmuganayagam first met, they were both just trying to get some peace and quiet. It was early 2014, and they were representing the University of Wisconsin-Madison at a fancy event to promote the university’s research to local politicians. After hours of talking to senators, Shanmuganayagam was fried, and went for a walk to clear his head. That’s when he bumped into Konsitzke, an administrator at the University of Wisconsin’s Biotechnology Center. They introduced themselves, and discussed their work. Shanmuganayagam said that he ran a facility that rears miniature pigs, which are genetically engineered to carry mutations found in human genetic disorders. Scientists can study the mini-pigs to better understand those diseases.

“And I said: I have a project for you,” Konsitzke recalls.

Konsitzke’s son Mason, now aged 7, was born with little brown birthmarks on his buttocks. Many kids have one or two of these café-au-lait spots and at first, Konsitzke thought they were cute. But after more appeared, he did some research and found that such spots are a common symptom of neurofibromatosis type 1 (NF-1)—an incurable inherited disease. Around Mason’s first birthday, a pediatrician confirmed the diagnosis. Read more.