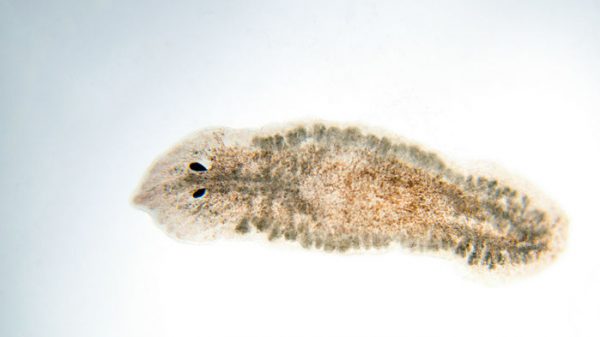 Planaria are master regenerators, thanks to a certain type of stem cell. Photo credit Science magazine.

Though often no bigger than an apple seed, planaria are the envy of the animal kingdom. Cut them into a dozen pieces, and each piece will regrow into a full new worm—a remarkable feat of regeneration beyond the ability of most other animals. Now, researchers have pinpointed the cell—and a key protein—that kick-starts this process.

The discovery “is a major breakthrough in the field,” says Ricardo Zayas, a developmental biologist at San Diego State University in California who was not involved with the work.

Researchers have known for decades that a group of unspecialized stem cells called neoblasts help planaria regenerate. But they’ve failed to figure out exactly which type of neoblast works this magic. So Alejandro Sánchez Alvarado, a developmental biologist at the Stowers Institute for Medical Research in Kansas City, Missouri, tapped new techniques for isolating single cells and characterizing their gene activity. That quest led him and his colleagues to 12 possible candidate cell types for a master regenerative cell, of which one had an unusual protein on its surface that resembles a class of cell surface molecules, called tetraspanin, that has been implicated in human cancer—these proteins help tumor cells spread throughout the body. Read more.