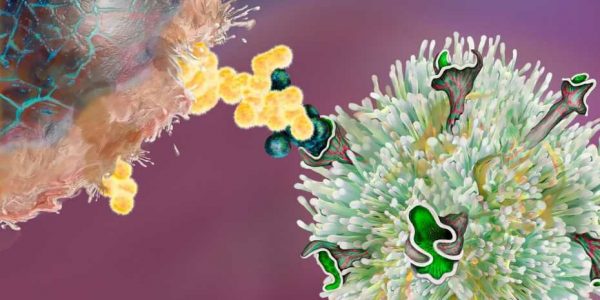 T cells (left) become active in the body only when they recognise a peptide (blue, centre) located on one of the immune system’s sentinel cells (right). The ETH scientists repurposed sentinel cells in such a way that they indicate which peptides the T cells recognise. Photo credit: Medical Xpress/ Science Photo Library / Keith Chambers

Medicine has great hopes for personalised cancer immunotherapy. The idea is to have a vaccine prompt the immune system to fight a tumour. Scientists at ETH Zurich have developed a method that allows them to determine which molecules are suited to patient-specific immunisation.

Cells belonging to the body’s own immune system can help fight tumours. For several years now, this has allowed oncologists to use medications known as checkpoint inhibitors to encourage T cells to eliminate tumour cells. Last year the two scientists who discovered this therapeutic approach were awarded the Nobel Prize for Medicine. Read more.