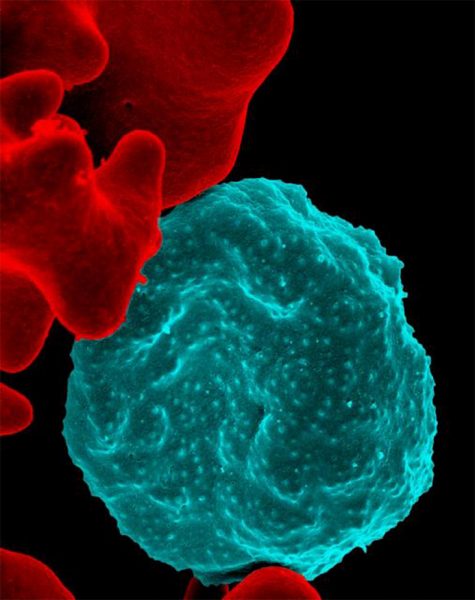 Colorized scanning electron micrograph of red blood cell infected with malaria parasites, which are colorized in blue. The infected cell is in the center of the image area. To the left are uninfected cells with a smooth red surface. Photo credit: NIAID

Enrollment has begun in a Phase 1 clinical trial to test the safety of a new investigational drug designed to treat malaria, as well as its effect on the human body. The first-in-human study is sponsored by the National Institute of Allergy and Infectious Diseases (NIAID), part of the National Institutes of Health (NIH), and is being conducted at the Duke University School of Medicine in Durham, North Carolina.

In 2016, an estimated 216 million new malaria cases and 445,000 deaths occurred, primarily among children living in sub-Saharan Africa, according to the World Health Organization (WHO). Although several approved treatments for the mosquito-borne disease exist, increasing drug resistance among the malaria-causing parasites is diminishing their effectiveness. Read more.